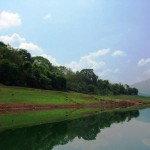 Morning start your drive from Cochin to Echippara which is the entry point to Chimmony Wildlife Sanctuary.The drive will take 90 minutes from Cochin.The drive is also interesting because the road is through beautiful small villages.After taking necessary permissions etc,the forest guards will take you for a trekking through the forest.Chimmony Wildlife Sanctuary is interesting for the lovers of bio-diversity because it houses a lot of endangered species of flora and fauna.

I still remember our visit in which we witnessed the mud puddling of butterflies which was unforgettable.Our Naturalist Mr Benny gave a detailed explanation on mud puddling of butterflies. Mud-puddling is the phenomenon mostly seen in butterflies and involves their aggregation on substrates like wet soil, dung and carrion to obtain nutrients such as salts and amino acids. This behaviour has also been seen in some other insects, notably the leafhoppers.Lepidoptera (butterflies and moths) are diverse in their strategies to gather liquid nutrients. Typically, mud-puddling behavior takes place on wet soil. But even sweat on human skin may be attractive to butterflies. This behaviour is restricted to males in many species, and in some like Battus philenor the presence of an assembly of butterflies on the ground acts as a stimulus to join the presumptive mud-puddling flock.

This can be a half day or Full day programme depending upon your time availability.Lunch could be arranged inside the Sanctuary,if it’s a full day programme.If you opt for a full day programme,you may opt for a bamboo rafting also through the Reservoir of Chimmony Dam.By evening drive back to Cochin.Or you may also extend your trip to the nearby destinations like Cherai Beach,Nattika Beach etc to stay back.You may also opt to stay in one of the Forest guest houses or a tree house inside the Sanctuary which depends upon availability due to limited number of units.

Established in 1984, Chimmony Wildlife Sanctuary with an area of about 85.067 km2 is on the Western slopes of the Nelliyampathi Hills. The highest peak in sanctuary is Punda peak (1116 m). Along with the neighboring Peechi-Vazhani Wildlife Sanctuary it forms a continuous protected 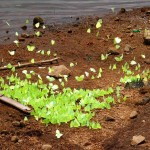 area of 210 km2. It also lies just west of Parambikulam Wildlife Sanctuary, providing some habitat connectivity with the forests of that relatively large protected area. The sanctuary consists of the watershed areas of Kurumali River and Mupliam rivers. Nestled in the sanctuary is Chimmony Dam which is built across the Chimmony river. The headquarters of the sanctuary is at Echippara which is 28 kms away from the Amballoor village in the north direction. Amballoor is 12kms away from Thrissur town in the south direction. There is a dam constructed across the Chimmony river at 75 m above the sea level. Consequent to the construction of the dam, an artificial lake has been formed with an area of 10 sq.km. and 20 m depth. Forest types include Tropical Evergreen Forests, Tropical Semi-evergreen forests, Moist Deciduous Forests etc.

Other significant sightings during the survey included those of the large hawk cuckoo (Cuculus sparverioides), broad-billed roller (Eurystomus orientalis) and ashy minivet (Pericrocotus divaricatus). About half of the large mammals found in Kerala are reported from Chimmony Wildlife Sanctuary, especially some of the globally threatened species such as tiger (Panthera tigris), Asian elephant (Elep 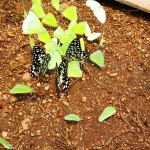 has maximus) and wild dog(Cuon alpinus). Other red-listed species found here include the Indian giant squirrel (Ratufa indica) and the endemic primates-lion-tailed macaque(Macaca silenus), Nilgiri langur (Trachypithecus johnii) and slender loris (Loris lydekkerianus). There are 39 species of mammals, 160 species of birds, 25 species of reptiles, 14 species of amphibians, and 31 species of fishes are reported from the sanctuary.

Such forests are found in the higher reaches of the Sanctuary. They are thickly wooded with lofty trees and have a closed canopy. High humidity and shade provide ideal habitats for variety of epiphytes and flowering plants. Canes and reeds are abundant. The herbaceous ground flora normally consists of species like Strobilanthus, arrowroot, ferns etc. The trees are tall, cylindrical and some with buttresses.

The sole tribal community within the limits of the sanctuary belongs to the “Malaya” tribe. An eco-development Committee was formed in October 2002 for the development of this community comprising 210 members belonging to 52 families residing in two colonies adjacent to the sanctuary. The tribal based eco-tourism projects initiated by the committee are progressing quite well.