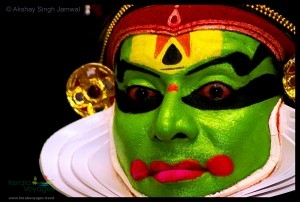 With foreign influences as disparate as Chinese and Portuguese, Arab and Dutch, Kerala is the spice coast of India. Edged by a thread of unbroken beachline, the state’s heart is composed of intensely green paddy fields and a unique network of rivers and lagoons. Upland Kerala, relatively little visited, is composed of hills thickly wooded with teak and rubber. It is here that Kerala’s most precious spices are grown in carefully nurtured plantations: cardamom, pepper and nutmeg.

Thiruvananthapuram (Trivandrum), the state capital, an international airport, has an exceptionally fine museum set in an amusement park. 16 km away is Kovalam, one of the most popular beaches in the country. Many visitors stay at Kovalam, driving into Thiruvananthapuram for sightseeing trips, rather than the other way round. Sri Padmanabhaswamy temple in Thiruvananthapuram, and Padmanabhapuram Palace, a short drive away, are important monuments.

Cochin, with a fine natural harbour, has been Kerala’s center of maritime trade for innumerable centuries. Along the harbour, rows of antediluvian Chinese fishing nets indicate Kerala’s trade with China, just as buildings along the water’s edge testify to the erstwhile presence of Dutch and Portuguese colonisers. Jewtown, complete with an immaculately preserved synagogue, has a flavour all its own, while Tripunathura, at the other end of the city, has many traditional houses with central courtyards. Kerala’s multitude of faiths – Islam, Judaism, and a host of sects of Christianity and Hinduism – all coexist harmoniously in a state that is known for its Marxist inclinations! Kerala’s traditions of dance forms, which originated from temple worship, can be witnessed at regularly held performances. Lecture-demonstrations of the most spectacular of these – Kathakali – are held daily at many centres in Cochin. Teyyam, at once an act of worship and visual feast; temple festivals complete with caparisoned elephants; Kalaripayata, the indigenous art of self defence; all are a part of Kerala’s remarkable heritage of performing arts, and can be witnessed at various centres in Cochin and Thiruvananthapuram. A five hour drive from Cochin leads into thickly forested hills, past rubber and spice plantations, and into southern India’s tea growing district headquartered at the charmingly old world Munnar. From Kottayam toAlleppey is a world of palm fringed waterways, a route which is covered by motor launch. Elderly sailboats, long barges transporting tons of coconuts and tiny skiffs used to transport children to school are common sights on these backwaters.