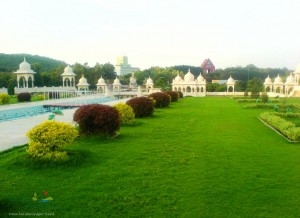 Andhra Pradesh’s capital city, Hyderabad has the atmosphere of an Arabian Nights fairy tale. Whimsical palaces, erstwhile stately homes and crowded bazaars filled with shops selling Hyderabadi pearls, incense and copper utensils characterise the city, while in the distance looms Golconda Fort. The city’s historical connection traces itself to the rulers or Nizams whose wealth was legendary. Rooms full of jewels and currency notes, a garage full of gleaming Rolls Royce’s are all now part of history, but a unique culture lives on, colouring the city with its distinctive charm.

The Epicurean tastes of this most exalted royal house of princely India gave rise to a fabled cuisine based on painstaking preparations and slow cooking. Much of Hyderabad’s old town can be covered on foot. The city’s important landmarks include Charminar, a 16th century gateway; the Salar Jung Museum which exhibits priceless treasures alongside trivia that made up the personal collection of the owner; Mecca Mosque and Golconda Fort. Nagarjunakonda is the site of ongoing excavations which have revealed Buddhist temples, stupas and monasteries.