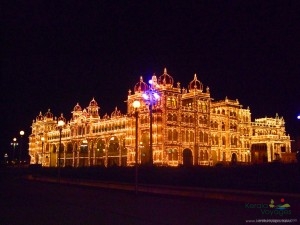 Karnataka, with its capital at Bangalore, is home to a fascinating legacy of richly carved temples, imposing mosques and trappings of a royal past. Bangalore, with its many hotels and fine restaurants, is a good base for exploring the state. At once a modern industrial city, a shopper’s paradise and a gracious legacy of the British, Bangalore is renowned as much for its industrial plants as for its silk saris, and for the sprawling Cubbon Park which lies at the heart of the city, as also its prestigious race course. Mysore, the capital of the erstwhile princely state, has a profusion of palaces and museums. Nearby Srirangapatnam is linked to the memory of one of the old state’s best known rulers – Tipu Sultan. Somnathpur, a few miles away, has a magnificently carved temple. Belur and Halebid have between them a series of carved stone temples. For perfection of finish, wealth of detail and sheer artistry, they are unrivaled specimens of the art of temple sculpture. Hassan, with a comfortable hotel, makes the perfect base from which to explore the riches of Belur and Halebid. Also a short distance away, Shravanbelagola is famous as the pinnacle of the sculptor’s art. A figure 120 metres tall has been carved out of a single piece of granite in 183 AD. Every 12 years, the figure of Gomateswara is ritually bathed by priests and witnessed by millions of devotees in one of the most colorful festivals of the austere Jain religion.