On arrival at Delhi International airport  and after collecting your baggage you have to come out of the main exit gate, where our official representative shall be waiting for you, holding a Paging  Board by your Name. After meet and greet our representative shall transfer you to pre booked hotel. Rest of the day at leisure.Overnight at hotel. 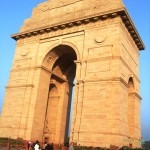 India’s capital and a major gateway to the country, contemporary Delhi is a bustling metropolis, which successfully combines in its fold the ancient and the modern. One of the most historic capitals in the world, Delhi is a treasure trove that reveals the ultimate combination of tradition and trends. Delhi is made up of seven ancient cities, spanning the period from the 11th to 20th centuries. Delhi has seen the rise and fall of many emperors, which have left behind a plethora of monuments that commemorate the grandeur and glory of bygone ages. Very few cities in the world can express such a profusion of architectural styles. Its many-layered existence is tantalizing and can entice the curious traveller into a fascinating  journey of discovery.

After breakfast at the hotel, you will be driven for a guided Tours of Delhi 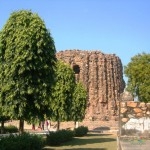 After  breakfast at the hotel,drive to Jaipur (250 Kms / approx 06 Hours). On arrival at Jaipur,check into your hotel for  overnight stay.
The vibrant capital of Rajasthan renowned for its forts and palaces is popularly known as the ‘Pink City’ because of the pink-colored buildings in its old city. An ideal base for touring the royal state, the city has the distinction of being the third jewel of India’s “Golden Triangle”. Its main claim to fame is that it is India’s first ‘planned’ city built by the famous 18th century astronomer King Sawai Jai Singh II. Jaipur is not only the gateway to the state; it is also the most natural place to begin a discovery of Rajasthan’s multifaceted attractions. Its beautiful buildings including the City Palace, Amer Fort and the landmark HawaMahal are truly worth seeing. Browsing through the markets in Jaipur, where skilled craftsmen display jewellery, paintings, carvings and colourful textiles, is an enjoyable experience for tourists.

Today you shall have a complete Tours of Jaipur ( The pink city of India (Rajasthan ) After breakfast you leave for an excursion trip to Amer fort. A Joy ride on elephants Back up to the Fort is real fun. Amer fort built in the 17th century, the Palace is a distinguished specimen of Rajput architecture. 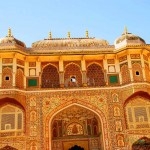 The Jai Mandir (Hall of Victory) is so delicately ornamented with find inlay work that it glows. The fort of Jaigarh, crowing the summit of a peak is of amazing beauty and grandeur. After visiting fort, drive back to city of Jaipur enroute visit Handicrafts factory / cottage industry – housing rajasthani handicrafts-, Gem stones and Antiques for which Jaipur is worldwide famous. Lunch at any restaurant, followed by city Tours drive past the pink city, visit City Palace, JantarMantar, HawaMahal, Rajminder Theater. Evening shopping, Dinner at Hotel / Restaurant.Overnight at hotel in Jaipur.

After  breakfast at the hotel,drive towards Agra (230 Kms / approx 04 Hours) enroute visiting FatehpurSikri .Afternoon for sightseeing of Agra.Visit Taj Mahal and Red Fort.You may visit the local bazaar to see the public life. Overnight at Hotel. 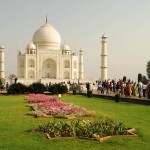 Agra – globally renowned as the home to one of the Seven Wonders of the World – the Taj Mahal,a symphony in white marble, a tribute to eternal love, it was built by the Emperor Shah Jahan in memory of his wife Mumtaz.  The architectural splendour of the mausoleums, the fort and the palaces in Agra is a vivid reminder of the opulence of the legendary Mughal Empire. Agra was their capital for nearly a hundred years from 1564. A pleasant town, with a comparatively easy pace, Agra is known for its superb inlay work on marble and soapstone by artisans who are hereditary craft persons. The city is also famous for its carpets, gold thread embroidery and leather shoes.

After  an early breakfast at the hotel,drive to Gwalior.(2.5 Hours drive).Full day  sightseeing of Gwalior . Watching the Light & sound show in the evening at Gwalior Fort will be an experience.Overnight at Hotel.

Gwalior’s tradition as a royal capital continued until the formation of present day India, with the Scindias having their dynastic seat here. The magnificent mementoes of a glorious past have been preserved with care, giving Gwalior an appeal unique and timeless. Gwalior’s history is traced back to a legend. In 8 A.D, a chieftain called Suraj Sen was stricken by a deadly disease. He was cured by a hermit saint, Gwalipa, and in gratitude founded a city which he named after the saint who had given him the gift of new life. The new city of Gwalior became, over the centuries, the cradle of great dynasties and with each, the city gained new dimensions from warrior kings, poets, musicians and saints, contributing to making it a capital renowned throughout the country. Since then, Gwalior is considered to be a city where a rich cultural tradition has been interwoven into the fabric of modern life. Also where a princely past lives on in great palaces and their museums. And where a multitude of images merge and mix to present to the visitor a city of enduring greatness. 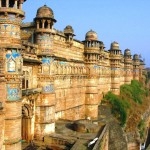 The entire city is a visual and aesthetic feast, for the builders of Gwalior were great architects. Take a walk through the streets of the city and you will discover old havelis with exquisitely carved doorways and windows; at almost every street crossing you will find statues of the Scindia family. Museums and art galleries are treasure houses and beautifully maintained palaces give the city its inimitable regal flavour. Sightseeing in Gwalior is a magical trip into the centuries gone by.

After breakfast check-out from hotel and drive to Orchha for a city tour of ORCHHA. Full day for sightseeing. Overnight in hotel.

Orchha City Details: Raj Mahal, the first palace within the Orccha citadel was built by Raja RudraPratap, but completed by his successor, Madhukar Shah. Rani-ka-Mahal, built for Madhukar Shah’s wife, is of notable interest. Her ornate bedroom was decorated with beautiful murals depicting scenes from Ramayana and various incarnations of Lord Vishnu. JehangirMahal built by Bir Singh Deo is probably the most striking palace in Orchha with its elegant hanging balconies, countless windows with stone pierced screens and a beautiful gateway decorated with turquoise tiles. It was built in honour of Mughal emperor Jehangir during his visit to Orchha. The 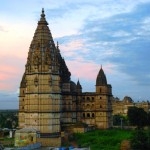 painted palace of Rai Praveen Mahal was built for the beautiful courtesan and poetess, RaiPraveen, by Raja Indramani, who had great affection for her. Sheesh Mahal built in the 18th century has little of its past splendour, but offers sweeping views of the town from the terraces. It’s a heritage hotel now. Manyhavelis dot the town of Orchha, of which Dauji-ki-haveli significantly stands out. Among the temples, Laxmi Narayan Temple and Chatturbhuj Temple are quite famous. While the former temple has elaborate murals in typical Orchha style, the latter is the largest temple complex in the town. A cluster of 14 cenotaphs or chattrisof the kings of Orchha on the riverbanks of Betwa are best viewed from across the bridge. There is also the Martyr’s Memorial of Chandrashekhar Azad, the great hero of the Indian independence struggle, near the fort.

After a leisurely breakfast,drive to Khajuraho.On arrival in Khajuraho, check into your hotel.After go for an orientation tour of Khajuraho. Overnight at Hotel.

Full day sightseeing. Khajuraho temples represent some of the most exquiste specimen of Hindu architecture and sculpture. Today only 25 of the original 85 temples remain.  The most important are Chaunset Yogini Temple dedicated to Goddess Kali, The Mahadev Temple, Chitragupta Temple, Lakshamana Temple and Parsvanath Temple.  Overnight stay at hotel in Kahjuraho.

In the temple architecture of India, the Khajuraho complex remains unique. One thousand years ago, under the generous and artistic patronage of the Chandela Rajput kings of Central India, 85 temples, magnificent in form and richly carved, came up on one site, near the village of Khajuraho. Today, of the original 85, only 22 have survived the ravages of time; these 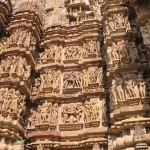 remain as a collective paean to life, to joy and to creativity; to the ultimate fusion of man with his creator. It is possible given the eclectic patronage of the Chandelas and the wide variety of beliefs represented in the temples, that they had the concept of forming a seat of religion and learning at Khajuraho. It is possible that the Chandelas were also believers in the powers of Tantrism; the cult which believes that the gratification of earthly desires is a step closer to the attainment of the infinite. It is certain however, that the temples represent the expression of a highly matured civilization. Yet another theory is that the erotica of Khajuraho, and indeed of other temples, had a specific purpose. In those days when boys lived in hermitages, following the Hindu law of being “brahmacharis” until they attained manhood, the only way they could prepare themselves for the worldly role of ‘householder’ was through the study of these sculptures and the earthly passions they depicted.

Today you will be transferred to Khajuraho Airport to connect your flight to Varanasi.On arrival check into your hotel and later proceed for local temple visits. Overnight at the Hotel

Varanasi, the holy city of India, is also known by the name of Kashi and Benaras. Kashi, the city of Moksha for Hindus since centuries, is known for its fine-quality silks, ‘paan’ and Benares Hindu University and Avimukta of the ancient days, Varanasi is the most popular pilgrimage point for the Hindus. In Hinduism it is believed that those who die and are cremated here get an instant gateway to liberation from the cycle of births and re-births. Considered as the abode of Lord Shiva, Varanasi is situated on the banks of River Ganges, which is believed to have the power of washing away all of one’s sins. Varanasi is more than 3000 years old and is famous as the city of temples.

Early morning go for a boating in the Ganges and visit the body burning places.Return to the hotel for breakfast .After breakfast, go for a full day sightseeing of Varanasi. Visit Sarnath Museum & Buddha Spa. Overnight at the Hotel. 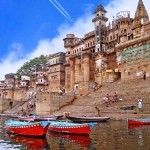 Sarnath has yielded a rich collection of sculptures, artifacts and edifices comprising numerous Buddha and Bodhisattva images and other ancient remains. To house all the findings and excavations at Sarnath, the Archaeological Survey of India established a site Museum at Sarnath. Finest specimens of Buddhist art and other important remains have been housed at the museum.While the single most famous exhibit of this museum is the lion capital, the Sarnath museum has a small but awe-inspiring collection of Buddhist artifacts. Among the things to see is a beautiful sculpture of the Buddha from the fifth century. The Buddha sits cross-legged, with eyes downcast in deep meditation, and a halo around his head. 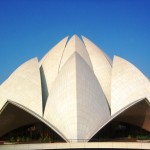 Akshardham Temple was constructed by the BAPS foundation – considered to be a modern day Wonder of the World. It is one of the biggest and most intricate religious places of worship ever constructed. Akshardham means the eternal, divine abode of the supreme God, the abode of eternal values and virtues of Akshar as defined in the Vedas and Upanishads where divine bhakti, purity and peace forever pervades. For the first time ever in the world witness the heritage of India in all its facets, insights and beauty at the Swaminarayan Akshardham through its monument, exhibitions, verdant gardens and other attractions.

Like all good things,your holiday experience in North India comes to an end but you will always carry with you memories of this unique and unforgettable experience.Today, you will be assisted and transferred to Delhi International airport for your flight home or for onward journey  to South !!